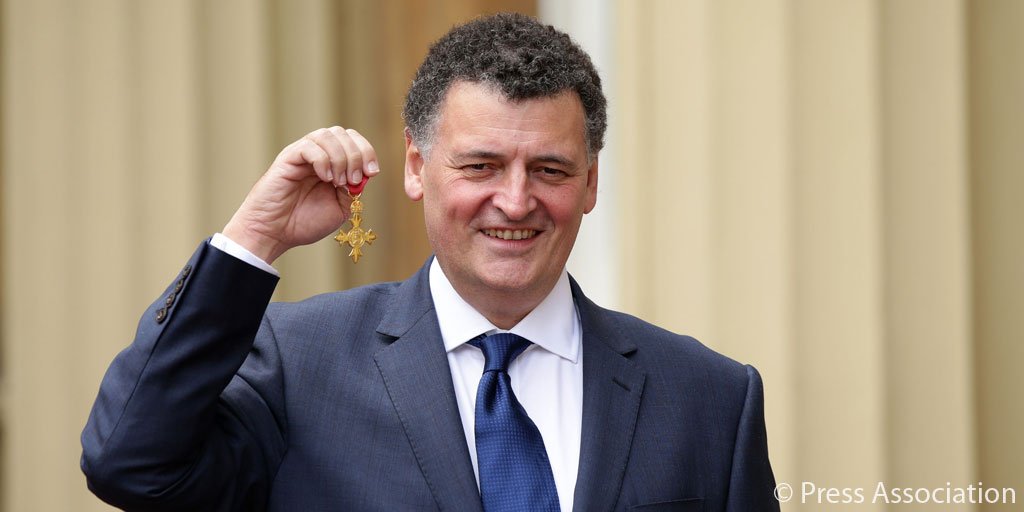 It seems pulling double duty on two hit TV shows has paid off for Steven Moffat. The “Doctor Who” and “Sherlock” executive producer received an award from British royalty for his work. He was honored with an OBE, which stands for Officer of the Most Excellent Order of the British Empire. (the 2nd of 4 levels of awards by The Queen)

Moffat received his award on Thursday in London. “I’ve got not one, but two dream jobs,” he explained to the Belfast Telegraph. “So to get this lovely thing for already indulging myself in public, seems like an excess of good fortune.”

OBEs are given to those who provide “distinguished service to the arts and sciences, public services outside the civil service and work with charitable and welfare organizations of all kinds,” according to the official website of the British monarchy.

Moffatt has worked on the long-running sci-fi hit “Doctor Who” since it relaunched in 2005. He took over as showrunner in 2010. Simultaneous, he started working on “Sherlock” in 2009. Both have attained success not only in the U.K. but worldwide.

Prince Charles gave the award to the 54-year-old during an investiture ceremony. Moffat commented that the formalities made him feel like a student. “It was very thrilling and formal and slightly, slightly, just very slightly, like being back at school,” he explained. “But nicer because everyone got a prize.”

Unlike other awards for television, Moffat knew he would receive his OBE well before the ceremony. He was revealed as an honoree last year. “I’m astonished and more thrilled than I ever thought someone like me would be,” he told Radio Times in June. “I’m not the least bit cynical, or the least bit trying to be cool about it.”

Verity Lambert, Doctor Who’s first Producer got an OBE many, many years ago also. She passed away in 2007.

Doctor Who fan like few others. Also a fan of Science Fiction, Cooking Shows and more.
View all posts by mydoctor1962 »