Inverse.com: For 30 years, developers have been trying to make a decent Doctor Who video game, and for 30 years they have been failing miserably. Limitations of technology, horrendous design, licensing squabbles, poor execution, and more often than not, plain ol’ terrible decision-making have turned the quest into a running comedy of errors. Luckily, a truly great Doctor Who game might finally be on the horizon, though from an unlikely source.

It’s Not for Lack of Trying

There have been several attempts at Doctor Who video games, dating back to 1983. The BBC commissioned Doctor Who: The First Adventure for its own BBC Micro computer. Even by 1983 standards, the cassette-based game, which resembled a bootlegged Pac-Man, was downright terrible. Two years later, the BBC flipped genres and produced Doctor Who and the Warlord as a text-adventure similar to Zork and the popular Scott Adams series.

The BBC’s next foray into a Doctor Who game was Doctor Who and the Mines of Terror. Thankfully this time around, the BBC decided to license the franchise to a legitimate game development studio, and the new entry was leaps and bounds ahead of The First Adventure. But while the gameplay and graphics were on par with the other side-scrollers available at the time, the BBC decided to save few bucks by not using characters created by legendary show writer Terry Nation (who owned the rights to a number of important Who characters). Subsequently, instead of battling actual Daleks, players helped the Doctor thwart generic robot adversaries who kinda sorta looked like heavily pixelated Daleks, if you squinted the right way.

While the technology kept improving, the games … well, didn’t. In fairness, the 1992 release [*Dalek Attack*]https://archive.org/details/msdos_Dalek_Attack_1992) (click the link to take it for a spin yourself) wasn’t a bad foray into the 16-bit market, but in the era of the Sega Genesis and Super Nintendo, it was released for only the PC and outdated home computer systems like the Commodore 64. Doctor Who: Destiny of the Doctors looked to be the game Whovians had been waiting for: Not only was it fully licensed, but the CD-ROM game also featured new dialogue from all the living Doctor Who actors. For as much as they put into the production value, however, you didn’t actually play as the Doctor, but rather a globby alien thing called “The Graak.”

After the show’s reboot in 2005, it seemed like a given that someone, somewhere would knock decent Who game. And while the attempts in the ’00s were much better than their predecessors, the next-gen Doctor Who games were a series of tragedies. Three years after the reboot’s debut, the BBC finally got around to greenlighting a new project: a joint venture with Top Trumps that basically amounted to a virtual card game. I suppose if that’s your cup of tea, the Top Trumps game wasn’t terrible, but not quite what those of us who had been pining for a decent Doctor Who video game … expected.

From there, Nintendo dropped a massive chunk of change on licensing fees to produce the first Doctor Who games on the DS and Wii, complete with a special edition sonic screw Wiimote. If that comes as a bit of a surprise to those of us in the States, there is a reason: The game was released in only the UK, and even then, for only a short while.

In the meantime, the BBC finally made a Doctor Who game worth playing. Originally available for download only in the UK, The Adventure Games was exactly what Who fans had been waiting for. Released as series of episodes, the third-person games were relatively short, but as close to perfection as could be expected: The production was great; the graphics were amazing; the gameplay was solid; and even the storyline made you feel like you were at the controls of an actual episode. Matt Smith, Karen Gillan, Arthur Darvill, and Alex Kingston all recorded unique dialogue and were even rotoscoped to better capture their characters’ movements.

Of course, the BBC is gonna BBC, and shortly after the games became available in the U.S., the broadcaster decided to shelf the Adventure Games project five episodes in, to focus resources and efforts on yet another inexplicably terrible console game. Doctor Who: The Eternity Clock (released on PC and PS3) could have been a great game, but it was clear the project was so rushed, developers slapped the game together and published it without much in the way of testing or quality checking. After all the good lessons learned in Adventures Games, The Eternity Clock was poorly written, terribly designed, glitchy — a mess. Actually, the plan was to make an entire series of full-length console games, but Eternity Clock ended up being so bad, the BBC scrapped its plans for any further releases.

In an era where massively open-ended video game universes have become the norm, it is almost criminal there hasn’t been a Doctor Who game with the same scale and depth as a GTA or a Fallout. Fortunately, it looks like we might get a proper Doctor Who game after all, though it will likely be in the form of digitized Dutch building blocks. In 2015, Lego announced it would be adding the Doctor to its vast roster of characters for its Lego Dimensions release, and what it delivered was absolute fucking magic.

With the purchase of an additional level pack, Doctor Who occupies only a small slice of the Dimensions universe, but it does everything right. You can regenerate into Lego versions of all the Doctors (including John Hurt’s War Doctor), battle all the villains (Weeping Angels are surprisingly terrifying in Lego form), and even fly around in the TARDIS (which changes interiors to match the Doctor). 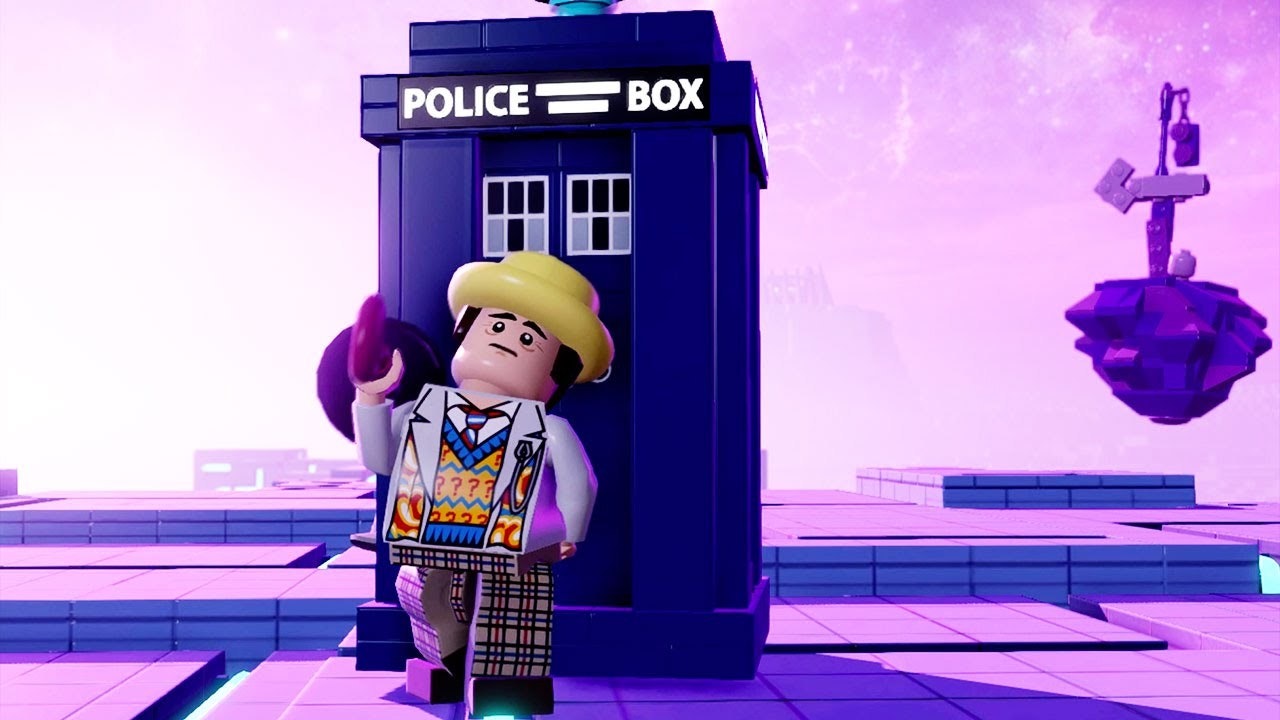 Why hello there, Lego Sylvester McCoy.

While there hasn’t been an official announcement, given the success of the Lego Dimension pack, it seems like a standalone Doctor Who game is well within the realm of possibility in the near future. While it is a far cry from the Bethesda or Rockstar treatment many of us die-hard Whovian gamers have spent years envisioning, given the long and illustrious history of failure, if it takes Lego to make the first worthwhile Doctor Who game, then so be it.

Then  you get the mish-mash of Doctor Whoa nd other characters, like Wonder Woman who makes cracks about The TARDIS looking like something Superman changes in… 🙂